The stick shaft is connected to the guiding parts that manage the rotation of each axis and form a 2-axis gimbal structure. One end of the guiding part is linked to the rotary potentiometers, which are detached from a joystick module (ALPS RKJXK122400Y), and the other end is glued to the spur gears. The potentiometers measure the tilt angles of the stick about the two axes. The stick shaft was made by laser-cutting the stainless steel, and the guiding parts and case of the module were 3D printed (Formlabs Tough Resin). To satisfy the mechanical performance requirement, we selected coreless motors (16DCT Athlonix 219E), which have no cogging and possess small inertia owing to their light mass.

To form an FS-pad, we packaged the force feedback module using the housing of an Xbox One controller. We cut out the shoulder button, trigger button, and half of the PCB to make space and attached the FS module using Shapelock thermoplastic. We kept the ABXY buttons on the pad and connected the wires on the PCB for use as inputs. 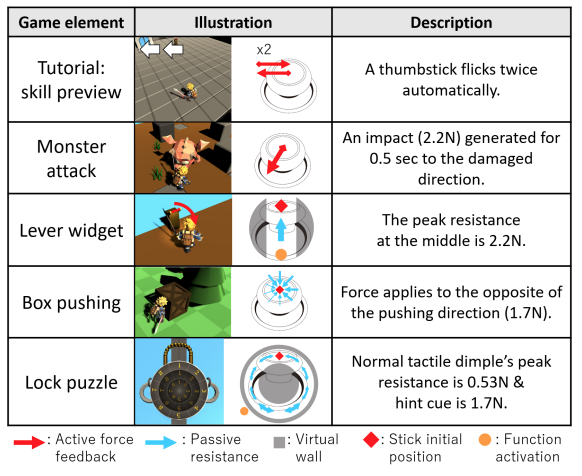